805.485.3700
Skip to content
There are some significant differences between offset and digital printing, although both have their individual advantages and disadvantages. When trying to decide which approach would be better for a job you have in mind, it would be good to have a thorough understanding of both processes, and what their strengths and weaknesses are.

What Does Offset Mean in Printing?

Offset printers use a type of technology that makes use of plates that are generally constructed from aluminum, and which are used to apply an image onto a rubberized blanket. This image is then rolled onto another medium like paper, and that constitutes the actual print.

It has been referred to as offset because the ink used in the process does not get directly transferred onto the print media. Once the press has been set up, it will generally run so efficiently that it becomes a great choice for creating in volume, and it also delivers a faithful reproduction of colors and text.

What Does Digital Printing Mean?

Digital printing involves the transfer of a digital-based image directly onto some form of media. It will typically involve professional prints on smaller jobs where digital sources are used, in conjunction with laser printers or inkjet printers. It will generally cost less than other methods, but on the other hand it’s not necessary to set up the plates which are required in other methods.

This option is generally a good choice when a short turnaround time is required, and when on-demand products are needed. In recent years, it has become more competitive due to advances in technology, as well as reductions in labor costs.

What are the Advantages & Disadvantages of Offset Printing?

One of the biggest advantages of this method is that it has the capability to produce very high-quality prints and colors. Another appeal of this process is its economy since after the initial setup has been accomplished, the unit cost decreases considerably as the volume of items increases. It’s also true that a huge range of print materials can be used, making it a very versatile method.
One of the disadvantages is that there’s a potential for a costly and time-consuming setup before the print run starts. For low-volume jobs, this can be a fairly expensive approach. 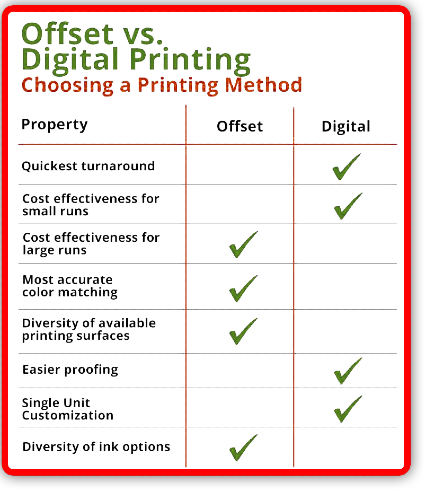 What are the Advantages & Disadvantages of Digital Printing?

If you need to have print material produced quickly, this would be a good choice since it can be accomplished very quickly. For low-volume jobs, it’s also the most economical approach. It is also very flexible in that it’s capable of handling numerous changes to printed material without having to undergo additional setups.

One of the disadvantages is that it can’t quite deliver the same color quality that other methods can. There are also fewer material options available, which means that it can’t quite measure up to the versatility. It also is sometimes a problem that cracks can appear in the edges of printed material when it’s folded, which is due to the fact that the printer ink doesn’t get fully absorbed into the paper.

Is Offset or Digital Right for Me?

There are several factors that should be used to determine which should be used for any project you have in mind. For one thing, you should consider how much turnaround time you have, because, on a tight schedule, digitally printed media would be better.

Probably the most compelling factor in deciding which technology to use would be the volume of the print project you have in mind. If the job requires a print run of less than a thousand, digital printing would probably be a more advantageous choice. For jobs well beyond 1,000 pieces, you might be better off economically to go with offset.